We’re talking about sincerity this week. Authenticity is a much-valued property in social media and people have a way of sniffing out (and calling out) Ridiculous Marketing Nonsense. Sincerity is rewarded and admired with folk wanting to help out by supporting a protest or contributing their knowledge or funding. So, we see folk mobilising online against Russia’s antigay laws by protesting the Sochi Winter Games. The Pixar Theory is an example of one passionate individual incorporating feedback from similarly passionate people to create an entertainingly elaborate unifying theory for all of the Pixar movies.  But we must ask if Diageo’s latest Guinness social media campaign is genuinely helping creative projects get much needed funding or a cynical marketing stunt that may turn people against the brand.

The Pixar Theory.  “All of the Pixar movies actually exist within the same universe!’ is the bold claim made by Jon Negroni. Inspired by  a video on Cracked.com that claims that all Pixar movies are about apocalypse, Negroni became obsessed with the idea of a grand unifying narrative that explained all of the Pixar movies since Toy Story. The main website doesn’t do the whole, meticulous and indeed crowdsourced theory justice, so read the full thing on Negroni’s blog.

Fascinating stuff, and bears a striking similarity to the rebooted Battlestar Galactica story too, no?

Sincerity in Social Media – A Tricky Business. Diageo’s latest Guinness marketing initiative in Ireland is coming under scrutiny. Diageo are making bursaries of up to €50,000 available to creative projects that garner enough votes from the public (and pass muster with judges that include The Script, Chris O’Dowd and more). The Irish Times’ Jim Carroll has major reservations about creatives effectively doing Diageo’s marketing for free by pestering their mates to vote for them through social media (the #arthurguinnessprojects hastag has been popping up in Irish folk’s Twitter and Facebook spaces quite a lot).

No-one is denying that the arts requires funds, but few seem to be asking why this sort of shizzle has become the norm. In terms of promoting great culture, art and creativity, plugging the bejaysus out of a company who flog alcohol to the masses doesn’t strike one as the right way to go about this.

But are Carroll and other critics looking at this from only one perspective? One commenter points out that ‘arts practitioners, journos etc. are in the eye of the storm – we work around these people all the time, so our feeds our packed with a multitude of asks. [H]owever when I reach out to my network outside of the arts, I’m the only ask they are ever getting. They don’t know any other artists, and actually they really want to get involved and help”.

Those Sochi Blues. I’ve tried but I can’t find the source of this striking collage of distressed LGBT people in Russia with the logos of various sponsors of the Winter Olympics in Sochi. I saw it on Facebook and then added it to a tweet which has been retweeted almost 100 times and reached thousands and thousands of eyeballs.

Get ready for Putin’s @olympics with @McDonalds @Visa @panasonic and @CocaCola #Sochi2014 pic.twitter.com/Q7XQYPj3O4

Those advocating a boycott or protest have also been making their feelings known on the official Facebook and Twitter accounts of the Sochi 2014 Winter Games. Judging by the lack of response through these channels, the social media team are hoping all the noise will just go away.

How many of you have a photograph of the single best moment of your life? If so, what a gift. (HT: @sports_casters for thought).

Twitter redeemed. This blog has been highlighting some of the more unedifying behaviour magnified by Twitter recently, so it’s with great pleasure that we can also bring you some of the opposite. Sports Illustrated writer Richard Deitsch tweeted out a request for followers to share a photograph of ‘the single best moment of your life’. The crowdsourced response is touching.

Philip Larkin vs Paradise Garage Forget ridiculous marketing nonsense for 4 mins and download some smart pop from Dubliner David Turpin. In advance of his ‘We Belong Dead’ album due in September, we get a  “disco meditation on the loss of sexual innocence and the dark side of parenthood”. ‘A Warning to the Curious’ is 20 percent Philip Larkin and 80 percent Paradise Garage”. (So slinky is the track that it fits beautifully in #comicbookresurrection, a DJ mix by my alter ego Daddy or Chips?)

The Week in Social is on vacation until Sept 6th. Enjoy the rest of the summer!

The UK Chart Midweeks will be out shortly. After the divisive Closing Ceremony, expect to see these five cracking the upper regions in the Official Chart next Sunday.

Who doesn’t already own this, one wonders?* Already a UK No. 6 (1975), No. 1 (1980) and No. 3 (1999), the track appeared in the Ceremony as a mix of Lennon’s vocal and those of the Liverpool Philharmonic Youth Choir and the Liverpool Signing Choir. Wikipedia tells us that it is one of the most covered songs of all time and that Elton John once changed the lyrics to take the pee out of his very wealthy pal, Lennon:

Expect to see it inside the Top 20.

Cheeky George did what no other artist did and performed his new one  – a rather decent bit of electronic pop which has little to do with the Olympic theme. The usually forthright George hasn’t let his Twitter followers and critics in on whatever deal was cut to give him such a massive global platform for the track, but you’ve got to admire whatever ballsy negotiator he had.

With the negative feedback, he’s gotten a bit testy:

Please join me in telling them to fuck off ! It was my one chance on tv to thank you all for your loyalty and prayers, and I took it. X

But perhaps, as he Tweeted directly after his performance, it’s mission accomplished:

White Light EP debuts at NO.2 on itunes album chart !! THANK YOU ALL :))

Just inside the Top 10 for George I think.

This has been threatening to go big for a long time. Originally creeping into the Top 40 in 2008, the track has already had Olympic exposure with it’s use by the BBC during the Beijing Olympics. It’s been used in all sorts of emotive places since then (a MacBook ad, part of the Official BBC Children in Need Medley which reached No. 1 in 2009, Sky’s Earth Day promo, etc). A big but gentle anthem from the unassuming Manchester act, it should comfortably get the Top 10 slot it finally deserves. 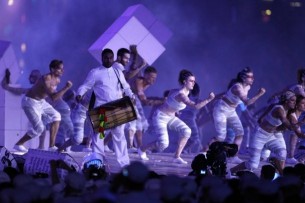 #savethesecret pleaded the organisers, but the rumours abounded that Kate Bush might finally return to live performance for the Closing Ceremony. With the release of Running Up That Hill with new vocals just hours before the broadcast, the speculation increased. It wasn’t to be. Instead the track was played to accompany one of the more striking set pieces. Unfortunately for Kate and the US, broadcaster NBC went to commercial infuriating many a Bush fan.

The original version made No. 3 in the UK in 1985. There’s a chance that this new version might join it in the Top 5.

5. Read All About It, Part III – Emeli Sandé

Along with Pet Shop Boys’ West End Girls, Scotswoman Sandé managed to feature in both Opening and Closing Ceremonies. Her version of Abide With Me memorably accompanied Akram Khan’s solemn dance piece for the bereaved of the 7/7 bombings and relatives of those in attendance. She was back two weeks later performing extracts from Read All About It on a couple of occasions.

The track was a 2011 No. 1 for Professor Green and Sandé, with her Green-free version appearing on her debut album shortly after. Her solo version also charted lower down in the chart a few times this year.

Top 5 on Sunday is fairly safe.

* Amusingly, I just checked my iTunes and guess what? I don’t have it.

Following on from my post on the Olympics social media guidelines and all the mischief since then, it’s probably no surprise that someone had a look at Brand Reversioning to have some fun.

What we’re creating in conjunction with all of these different digital and social networks is just to create something that actually means that, in years to come, people will have forgotten the Games and this is what they remember…

This hits far too close to home. 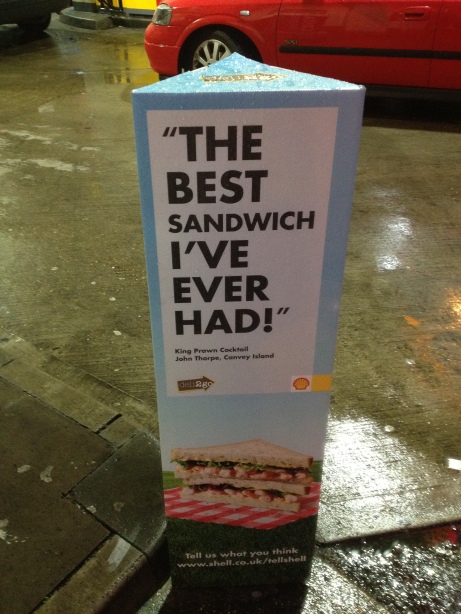 ‘The best sandwich I’ve ever had’ wrote John Thorpe of Canvey Island of the King Prawn Cocktail sandwich he purchased at a Shell service station.

I felt some degree of scepticism at this unlikely claim and I took to Facebook to share my misgivings.

There, the fragrant author, Serena Makesy, reminded us that advertising often pulls certain positive words or phrases from a larger piece of text.

She helpfully restored Mr Thorpe’s full text for us.

Having grown up on an island, raised by isolationist parents who believed themselves intolerant to wheat, I didn’t have a sandwich until, at 15, I was taken into care when the authorities realised that I was illiterate and had no teeth. On the way to the children’s home, the guards stopped at a Shell station, bought a sandwich and threw it at me in my cage. It was the best sandwich I’d ever had.

You can Tell Shell what you think.

You can treat yourself to more of Serena’s writing in many good bookshops. You will also enjoy the writings of Alex Marwood (for they are the same person).

PSB: “We hope you like our new direction! Guitars!”

Parlophone: “Love it! What do you want as first single?” {Please say Home and Dry}

Parl: “Yay! This is why we love you guys; you still have your finger on the pulse. And for the video…?”

Parl: “You think nothing. This time we talk, you listen. No rats, no poncy boring youths being androgenous. This time the first single will be ‘I’m With Stupid’ and you shall make a proper video with the Little Britain guys because the punters love them. Not rats.”

PSB: “Um, ok. But we choose the second single.”

PSB: “Hi guys! We’ve gone all pop again. AND it’s our turn to choose first single and the video!”

Parl: “Shit. OK, but we get to choose the second single and remember not to spend too much money on the video. And no frigging rats.”

PSB: “Deal! Oh, and we’ll put Did You See Me Coming? on the b side and give it away for free with the Mail on Sunday”

Parl: “Um…. are you sure….?” [whispers to marketing people] We can still put that out as a single again anyway, right?”

Marketing: “Oh yeah, nobody buys PSB singles except the fans and they’ll buy ANYTHING”

PSB: “What are you talking about over there?”

Did You See Me Coming? is out on 1 June as the 2nd single from Yes. (Despite the fact that it was a b-side to Love Etc, an album track and included on the 2.5 million copies of the PSB CD given away for free with the Mail on Sunday. I’m sure there is logic in this somewhere.)

Oh hang on, I forgot that I had lots of music on CD already and that I’ve illegally downloaded*much of the rest. Phew!

For those of you who asked, here’s a re-up of Rufus’ Ode to Antidote. You could listen to it at Viktor & Rolf’s website, but life is far too short to sit through such wankery.